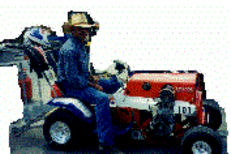 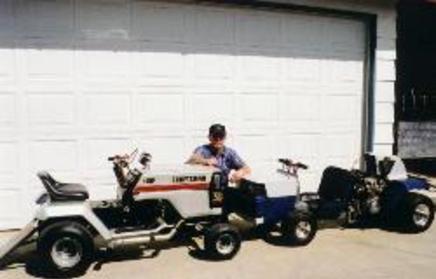 HOW IT ALL BEGAN!

Lavoy Smart and Terry Stowell are the two people responsible for starting this
"OBSESSION."

Lavoy and Terry built the first Outlaw Lawn Dragster in the summer of 1999.  It
took them a few weeks to build it and raced only once that year. That race was in
New Plymouth for the Farmers Co-op "Customer Appreciation Day." The dragster
was a Craftsman mower with a 500cc motorcycle engine.  People walked around
the dragster scratching their heads and laughing.  You see, all the other mowers
were stock, straight out of the garage.

The race was set!  The Craftsman against the stock mower.  The stock mower
dumped the clutch and popped a wheelie of sorts and raced off down the track.
Terry Stowell, the Craftsman driver, sat at the starting line with the engine revved;
and, as the other mower headed towards the finish line, Terry received his green
light and, as they say, "HISTORY WAS MADE!"

It wasn't but a few weeks later that Doug McGehee, Troy Bruce, and Turner &
Gerald Cowperthwait were in the thick of it conspiring to build the coolest, fastest
machine ever!  As more and more men, women (yes, women), and kids got
involved, racing brackets had to be set up, which included A, AA, and Junior
Outlaw.  We have motors from snowmobiles, Geo's, and motorcycles being used,
add in fantastic paint jobs and speeds close to 60 MPH in a 100 foot stretch,
people continue to be both amazed and amused!

We continue to enjoy racing and meeting people who attend.

For future race dates, please check out our calendar.